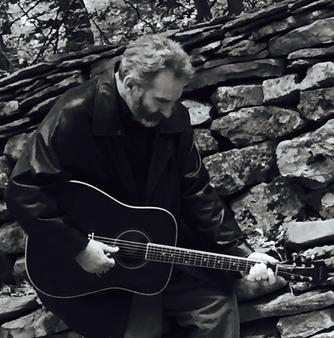 Dubbed a "modern day Bob Dylan" by legendary Muscle Shoals session
man Travis Wammack, Paul was born and raised in Muncie,Indiana.
His father was the CEO of the twelfth largest meat packing company in the
United States, Marhoefer Packing. His mother was a former elementary
teacher who was  active in local civic functions. While working summers
in the family business as a "pump boy", fueling , washing, and parking
trucks for the company fleet,  Paul, "just kinda fell in love with trucking".
Much to his parents' disappointment he left college to become a route driver
for a local food distributor.
Thirty years later, as a grizzled and scarred former owner operator,
having barely survived a harrowing accident , Paul was overheard singing
in the terminal parking lot by his fleet manager, Kevin Glass, an avid folk
and Americana fan. Glass inquired about the song he had been singing,
which was an original. He asked Marhoefer to sing him another and then
another. Further inquiry revealed that the veteran trucker had been writing
songs as a hobby for over thirty years. When Paul returned from his route
a few days later, his boss presented him with a black Epiphone DR 200,
then informed him he would be performing a few songs for the entire
terminal in five minutes.
Overcoming his self conciousness over his perceived cosmetic deficits,
Paul got through the concert, stating later he couldn't very well just take
the guitar and refuse to sing . Bolstered by the positive reaction of his coworkers,
he soon began singing at local venues , eventually opening for Ray Wylie Hubbard
in 2014, and finishing as a national runner up in the Overdrive magazine/Red Eye Radio Trucker talent search in 2015.
Paul would like to dedicate this  album , entitled Old Black Epiphone , to his old boss, Kevin, and to some special people God sent along the way, including
Michelle and William Marhoefer, Mary and Theldon Thornburg,  the co-producers of this project: Travis Wammack, Donnie Gullet , Jeff Templeton , his friends Stevie Glenn Shank and Michelle Teague, Overdrive magazine www.overdriveonline.com ,  Red Eye Radio, his beautiful wife of thirty four years Denise, and their children John, Jessica, Jordan,Kelly, Anna, Stevie and Audrey.

Ten percent of each purchase will go to

www.truckersfinalmile.org
a highly rated charity dedicated to bringing truckers home after a
serious accident.  Mindful of the financial turmoil which ensued in
his family in the aftermath of his own multi trauma crash, this is a charity
near and dear to his heart .